Villa Pecori Giraldi, long owned by the Pecori Giraldi family from which it was donated to the City of Borgo San Lorenzo in 1979, is one of the most interesting buildings in the area. 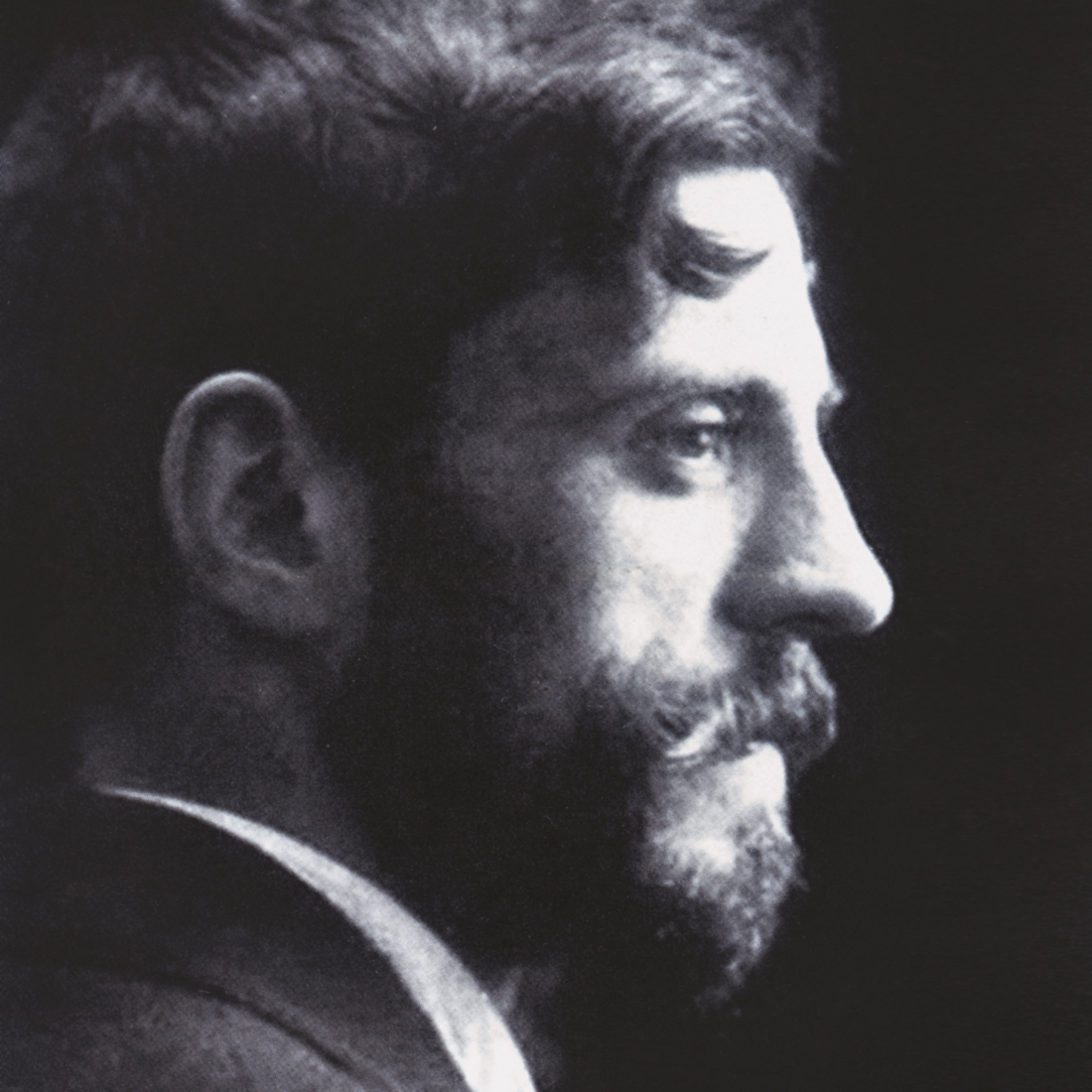 La Villa di Rimorelli in Borgo San Lorenzo, in the province of Florence, long owned by the Pecori Giraldi family, from which it was donated to the City in 1979, is one of the most interesting buildings in the area. Probably built on the site of an ancient construction built by the Giraldi family, the most illustrious family in the region, it became the property of Count Antonio Pecori in 1748 who added Giraldi to his own surname.
The large villa, which is spread over two floors, has a beautiful Renaissance-style facade topped by a strong crenellated tower, extensively restored in 1902.
The decoration of the interior of the villa began at the end of the nineteenth century. Lino Chini, in his history of Mugello, recalls the paintings that the Borghiano painter Angiolino Romagnoli (1836-1890) would have painted there.
The involvement of the Chini family in the decoration of the villa can be dated back to the mid-nineteenth century (1854). Pietro Alessio, a family forefather, with the collaboration of his young son Pio, carried out works inside it. The decoration of the grand part of the building was continued by Leto Chini, whose involvement can most likely be seen through the medieval-inspired paintings in the entrance hall.
Between 1906 and 1911, Galileo Chini (pictured) was involved, called in by General Guglielmo Pecori Giraldi, who was responsible for the continuation of the complex pictorial arrangement of the entrance hall. Here you will find the coats of arms and the deeds of noble Florentine families related, over the centuries, to the Pecori Giraldi and others events relating to its illustrious members. The villa and its decor were damaged in the earthquake of 29 June 1919: the restoration of the decorative part of the building was entrusted to Tito Chini, who worked on it with the help of his uncle Pietro.

The large entrance hall is the heart of the villa and the focal point of the decorative features. The fresco on the east wall depicts St. George killing the dragon and is attributable to Galileo. Above the lintel of the door on the west wall (which leads to the small room below the tower) there is a majolica on a blue background depicting, in slight relief, the Face of Christ crowned with thorns. The artefact, of remarkable quality due to its beautiful chromatic contrast and the confident design, especially of the hair, is attributable to Galileo and, as a concept, can be traced back to the early twentieth century. Painted on the eastern wall, next to the door that opens onto the large fireplace room, is a large impression of the heraldic insignia of Lavinia Morosini, whom Marshal Guglielmo Pecori Giraldi married as his second wife in 1917. The work bears the dates 1921-1922 and the double signature of Tito Chini. In addition to the small room under the tower there is another room decorated with floral paintings from the nineteenth century (perhaps attributable to the same Pietro Alessio) in which there is a small but delightful fireplace completely made from tiles produced by the Fornaci San Lorenzo.

After crossing the entrance hall again, you will enter a large hall, at the end of which there is a monumental ceramic fireplace. Its structure is decorated with a Renaissance imitation relief and the side pilasters bear the coats of arms of the Pecori and the Giraldi. Inside, the fireplace is covered with tiles with geometric motifs, again from the Fornaci San Lorenzo. 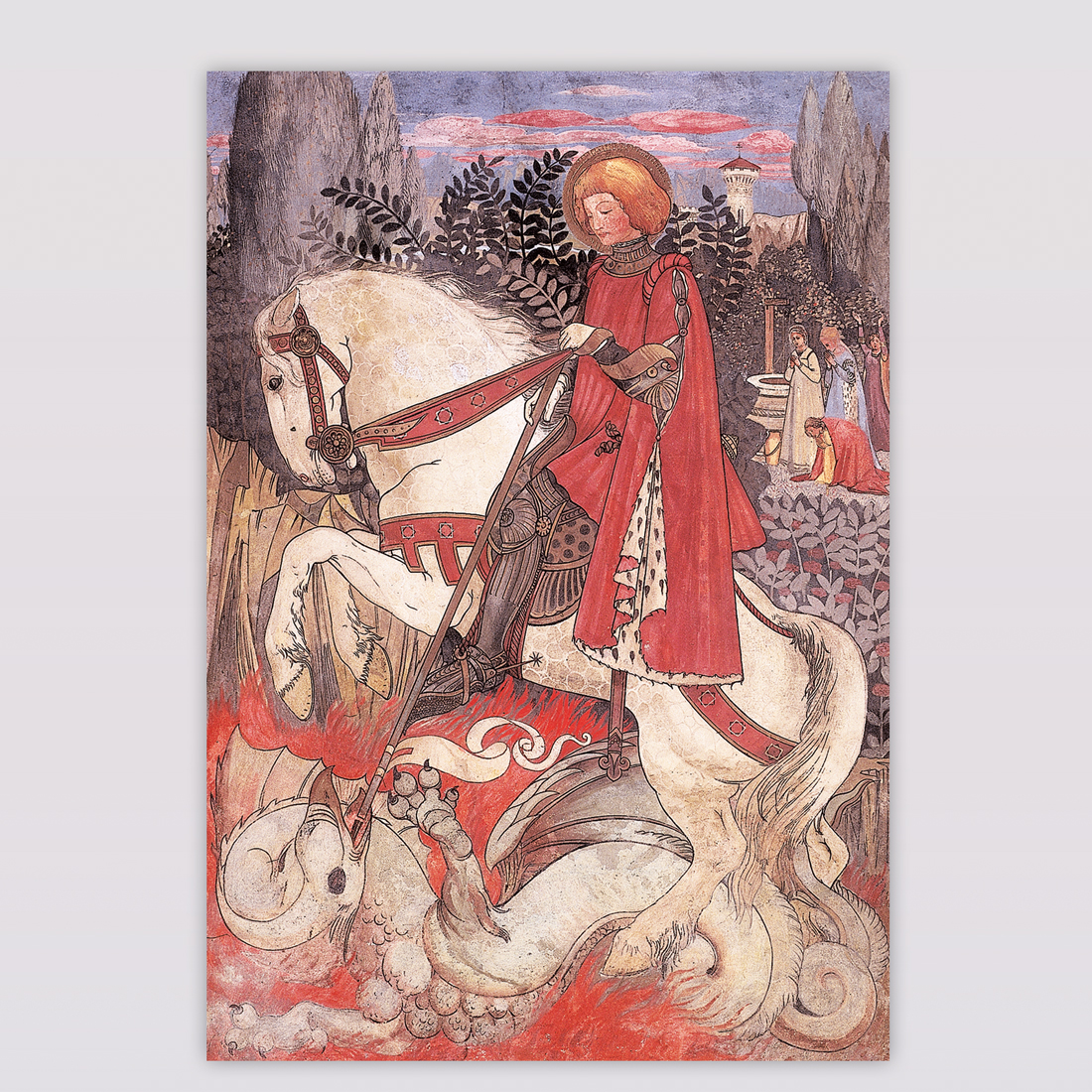 The small room leading to the spiral staircase that leads to the upper floor is striking due to the decoration of two of its walls, consisting of a faux tapestry motif with black and white lozenges that descends from halfway up the wall. 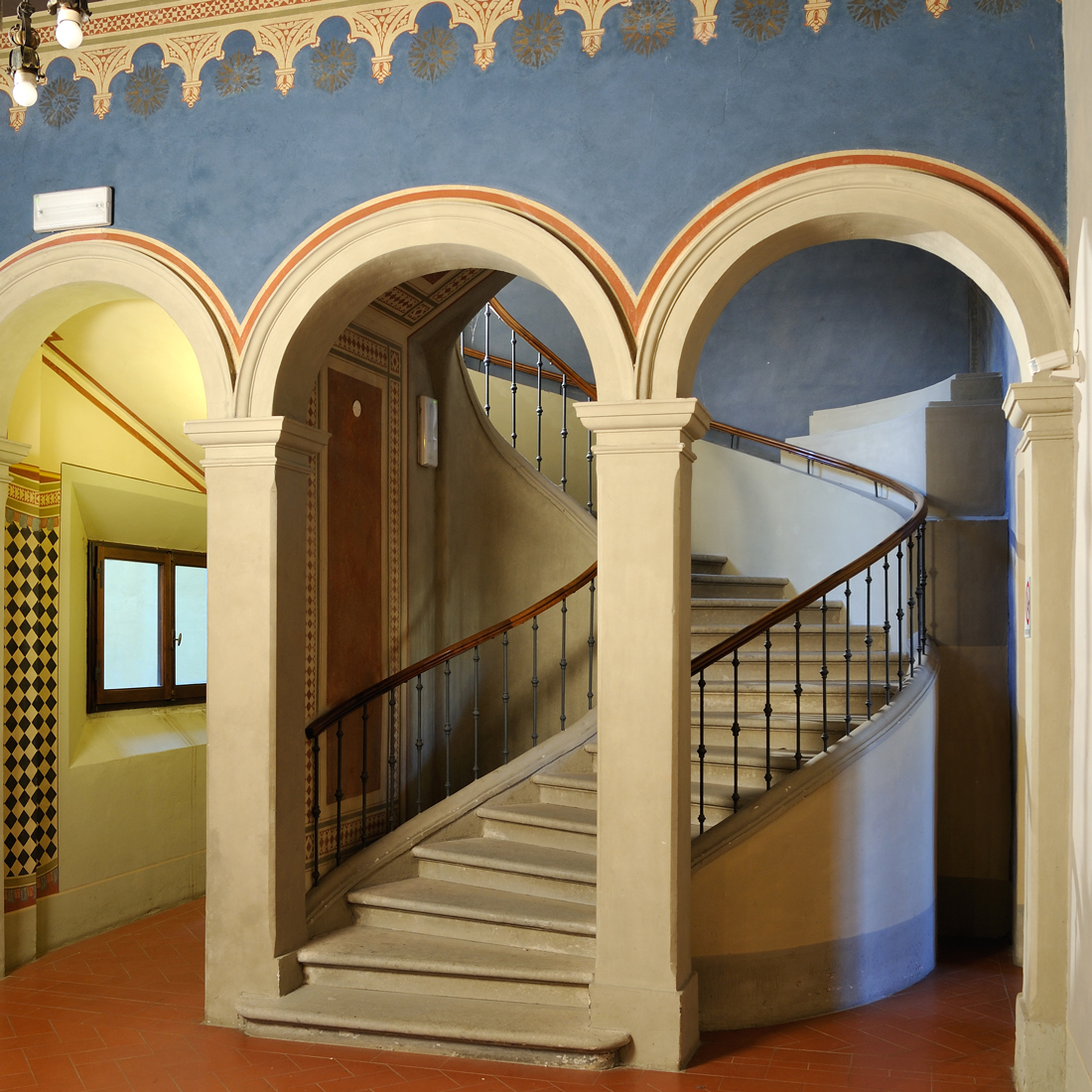 Above, the wall is blue, and a painted frame runs along it for “troubled” architects. The splendid curve of the staircase, the dynamics of which are reminiscent of the Art Nouveau style, occupies a room decorated with monochrome geometric motifs. On the upper floors of the villa, in various spaces, you will discover numerous decorations, all the work of the Chini family, where stylised geometric or vegetable motifs predominate. 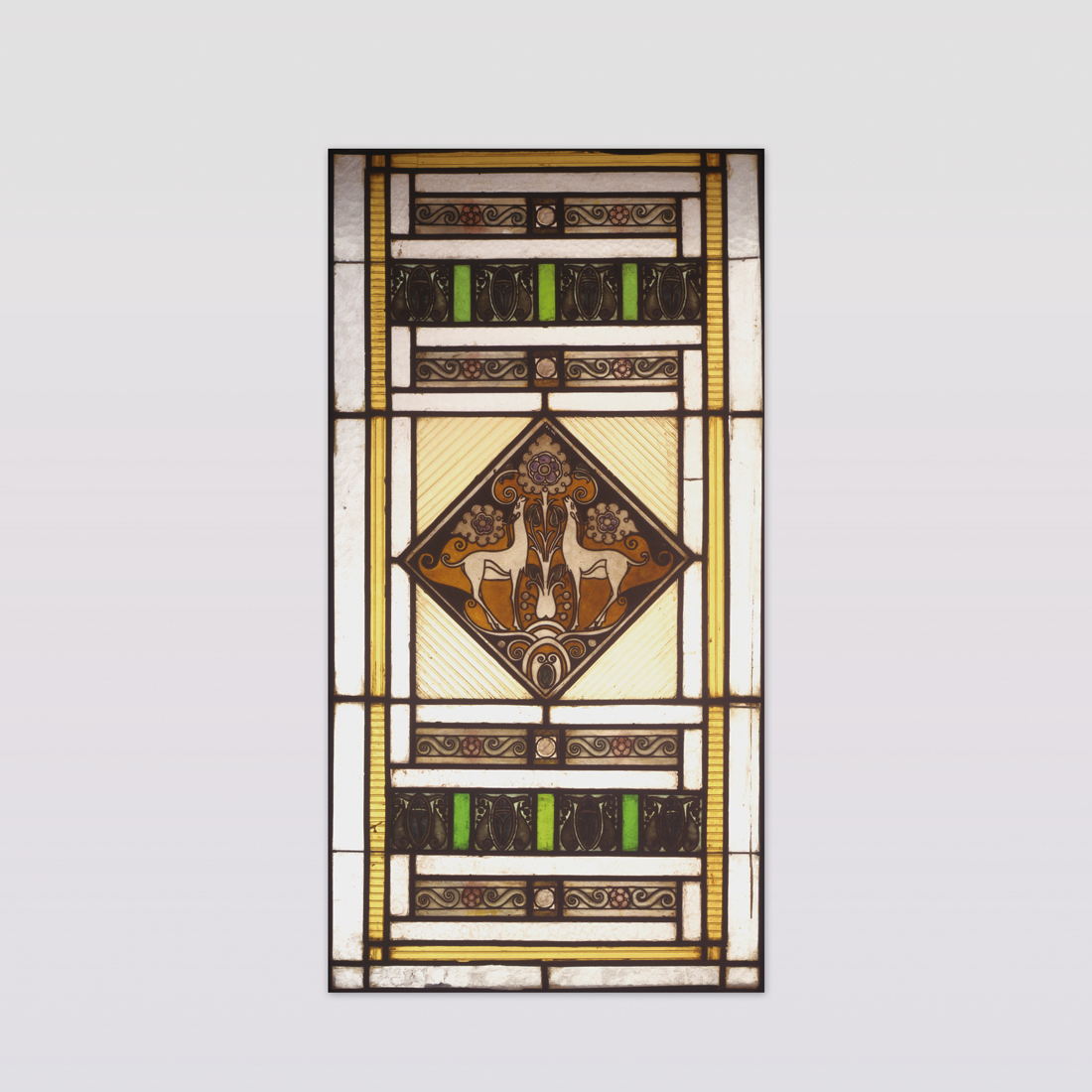 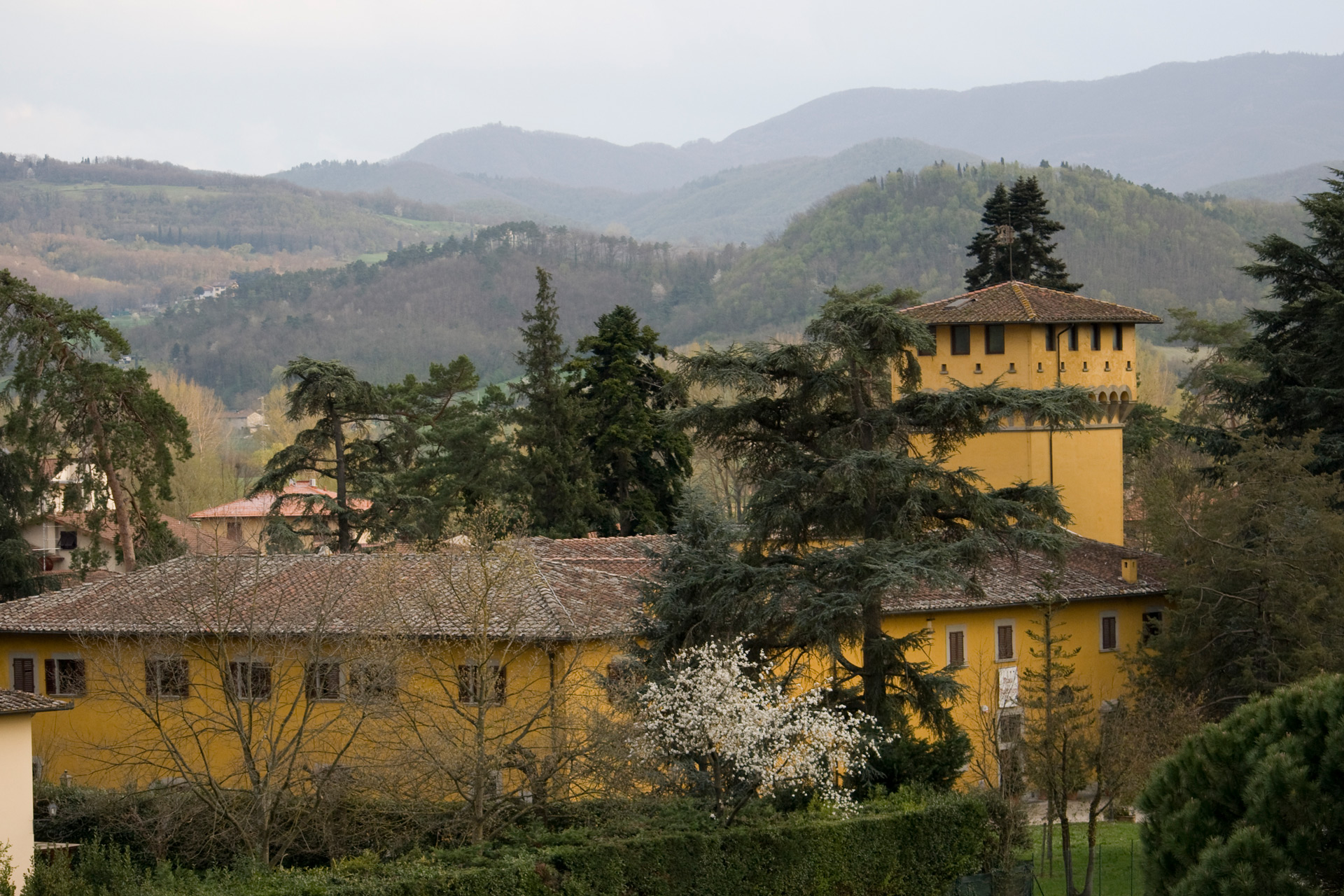